The Nike Air Raid tennis shoes have a Deadstock Investment Grade A rating. These throwback shoes provide a cutting edge canvas for new colorways and will likely be involved in multiple releases over the next few years. Putting a pair of the OG colorway away for a few years should be a good investment.

The Air Raid is an extremely rugged shoe designed for outdoor basketball games. The shoe has two overlapping velcro straps that buckle the user in tight. Aiming to deliver on the asphalt, these shoes have a flat, hard rubber outsole. The midsole is a high cut polyurethane that adds a strong splash of white against the colorway. Most colorway adaptations have kept the combination of a black sole and white midsole, with the splashes of color applied primarily to the straps and upper part of the shoe. 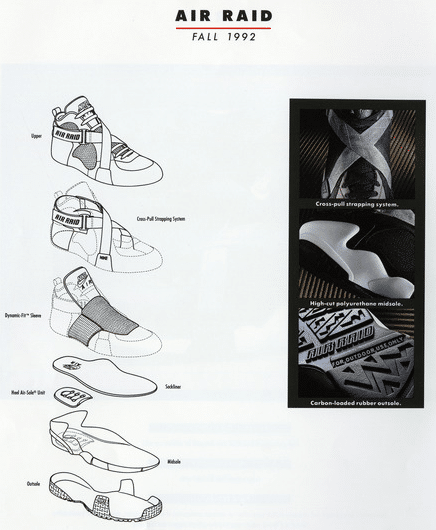 The rear of the shoe sports the phrase “For Outdoor Use Only.”

Spike Lee marketed the Air Raids for Nike under a peace mantra of “play together’ with the idea that everyone could come together on the blacktop for a game of hoops no matter if they came from South Dakota or from in the city. Spike also leaned into unique aspects of the outdoor game with a commercial focused on NBA player Tim Hardaway shooting jump shots in the wind. Hardaway was known on the court for his ‘killer crossover’ dribble move and these shoes invoked that with their cross over velcro straps. 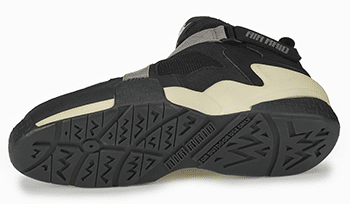 When Tim Hardaway yelled out “I Got Skeeelz” in the popular Nike Air Raid commercial he might as well have been talking about the shoes iconic designer Tinker Hatfield. Tinker Hatfield designed the Air Raid basketball after finding a post-it note on his desk from Nike higher-ups wondering if he could imagine an outdoor basketball shoe. He could and did, going on to design the strong outdoor cut with overlapping straps. Part of what makes the Air Raid a good investment is that their design has influenced the top kids basketball shoes of today. 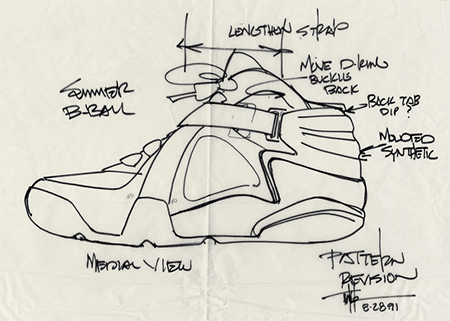 The Nike Air Raid shoes dropped in 1992 and got their first retro release in 2003. They have been featured several times since then but only in the OG colorway in Fall 2020. The most popular release of the Air Raid was probably the collaboration between Nike and Fear of God on the Fear of God Raid in 2019. That resulted in numerous Fear of God colorways being released with an evolved Air Raid design. The founder of Fear of God, Jerry Lorenzo, was quoted before saying how much he appreciated the Air Raid design going all the way back to the OG release in 1992.

The Nike Air Raid OG was released in late 2020 and could still be found for retail price by discerning shoppers for several weeks afterwards. It is suggested that you cop a pair now and put them in the closet for down the road. These are a prime deadstock investment with their tight attachment to the history of Nike Basketball. 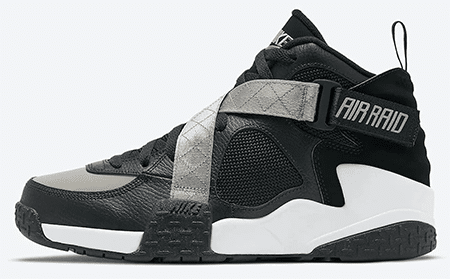