Jordan Brand has established the ‘Cool Grey’ colorway as their own with a number of releases over the years. Several of the most iconic Jordans that have gotten ‘Cool Grey’ colorways released include the Air Jordan 11 and the Air Jordan 3. With Nike now releasing Cool Grey colorways periodically, investors would be wise to add more of the colorway to their collection. 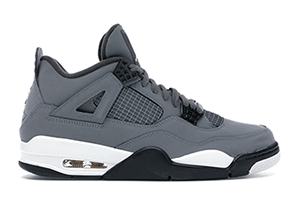 The Jordan 4 Retro Cool Grey shoes are a Deadstock Investment Grade A rating and a solid pickup for any sneakerhead. These shoes boast a sharp implementation of the cool grey color on an iconic Jordan shoe.

The Jordan 4 is one of the most popular basketball shoes of all time. It was the first Jordan with a global release by Nike and all around the world fans clamored for the shoe. In the Spike Lee movie “Do The Right Thing” key conflict in the plot even revolved around the shoes.

The shoes were designed by Tinker Hatfield and originally released in the classic White / Fire Red or Black / Cement Gray colorways. Since the shoes were so popular with kids, Nike has released dozens of new colorways over the years and a combination of fashion and nostalgia have consistently driven strong sales. 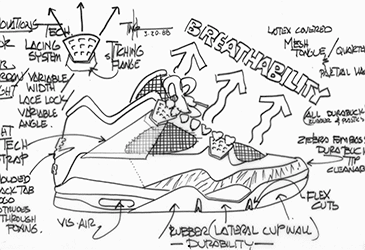 A key component of the Jordan 4 is the breathable mesh in the tongue and quarters. The mesh panel on the side would stay as an influential component of the Jordan 5. This webbed look contrasted strongly with the solid sides of the Jordan 3. The addition of flex cuts to the sole of the shoe and an angled lace lock also contributed to an overall sportier look than its predecessor. These different components also made for easy contrasting colorways like the iconic White / Fire Red, which used a lot of black as a third color in the lace lock and back tab for added contrast.

Since the Jordan 4 commonly presented a strongly contrasting colorway, there is a lot of appeal in the solid colorway presentation of the Jordan 4 Cool Grey. This shoe looks different from the other Jordan 4s on your shelf. 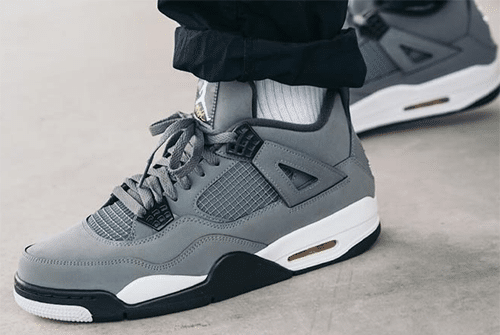 The Cool Grey colorway of the Jordan 4 first appeared in 2004 but it was the rerelease of the colorway in 2019 that gives deadstock investors opportunity. The 2019 Cool Grey / Chrome – Dark Charcoal is a Jordan 4 that has a strong, solid color design with the grey covering everything down to a sharp white and black sole. The shoe sports a Nike Air window on the bottom and a Jumpman logo on the heel. These shoes have strong universal appeal and a solid colorway that can ride the waves of fashion. There should be strong demand for this shoe for some time.

This shoe retailed for $190 and investors could pick up the shoe at that price for up to 6 months after release at their preferred shoe store. This shoe did not come storming out of the gate, but that is where a lot of the opportunity for shoe hounds exists. Good shoes don’t have to come exclusively from a Snkrs drop. In this case it was easy enough for people to cop this shoe at their local shoe store and bring it home deadstock and leave it up high on the closet shelf as an investment.

The Jordan 4 Cool Grey has great potential as a strong deadstock shoe with its sharp implementation of a now ‘standard’ Jordan colorway. As the Jordan Brand releases more shoes with the Cool Grey color it will only further boost the regard people have for this shoe. And with the iconic Jordan 4 shoe underneath, lots of sneaker heads from all over the world will be attracted to this design. The Jordan 4 Cool Grey colorway gets our Deadstock Investment Grade A.